Skip to main content
Metric Disconnect: How to Manage a Practice When Compensation & Productivity Are Out of Sync

Tread carefully, analysts warn. In the era of value-based healthcare, it may take more than shopworn business strategies to close the budget gap.

Physician compensation in cardiology continues its year-to-year climb, while production as measured by work relative value units (wRVUs) remains essentially stagnant. That’s the composite picture that emerged from the latest surveys by MedAxiom and AMGA. The findings, based on 2018 data, come at a time when cardiology practices must manage amid such industry cross-currents as an aging and dwindling pool of new professional talent, steady growth of patients with cardiovascular disease and the need for greater efficiencies to stay financially and operationally afloat in a new era of value-based healthcare.

This fluctuating environment makes it more important than ever that cardiology practices “manage to the metrics,” or key performance indicators (KPIs), across all of their operations, emphasizes Wayne Hartley, MHA, growth and service line development officer and vice president of consulting services for AMGA Consulting. “Gone are the days when you could close a budget gap by simply adding more volume,” he says. “Today, you need to look closely at productivity and compensation as well as financial and operating metrics to know where the opportunities for improvement are.”

Hartley cites staffing levels as an example. “Sometimes decisions are made not to hire support staff or advanced practice providers (APPs) because of the cost, but an in-depth analysis might find it could make the practice more efficient,” he explains.

Other areas that could yield rewards include reviewing professional liability insurance, which is often automatically renewed without going to market to see if better rates are available, and paying more attention to managed care and insurance contracts with performance incentives. In some cases, front-line providers may not be fully aware of the agreements’ payment criteria, potentially leaving considerable sums of money on the table.

One area cardiology practices have little control over is compensation, which has grown for five consecutive years, hitting a median total of $577,329 per FTE cardiologist—the second highest since 2012, according to MedAxiom’s 2019 Cardiovascular Provider Compensation & Production Survey. That’s a 3 percent bump over the prior year. With the number of providers remaining stagnant at best, there will be continued upward pressure on incomes, according to the survey.

“There is no shortage of cardiac patients out there, given the demographics of the U.S population,” says Joel Sauer, MBA, MedAxiom’s executive vice president. “Where there is a shortage is in the number of cardiologists, and it’s going to get worse.”

Indeed, one in four cardiologists is now over the age of 61, and the pipeline of new practitioners doesn’t appear adequate to replenish those transitioning out of the cath lab, according to MedAxiom (see chart below). What’s more, as cardiologists age, their wRVU production declines, the survey states. 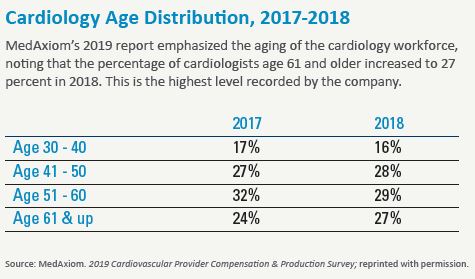 The softness in production was also visible from AMGA’s 32nd annual Medical Group Compensation and Productivity Survey. While cardiology compensation jumped 4.4 percent from 2017 to 2018, productivity lagged well behind at a 1.8 percent increase in wRVUs. By comparison, the survey found that physician compensation across the medical profession increased by a median of 2.92 percent over the same period, up considerably from its 0.89 percent increase the prior year, while productivity increased 0.29 percent after a 1.63 percent decline in 2017.

Looking over this fluid landscape, AMGA Consulting President Fred Horton, MHA, acknowledged in his firm’s report that compensation is increasing in many medical specialty fields without an equivalent increase in production. “This trend is causing organizations to absorb additional compensation expenses without balancing revenue from production increases,” he noted. Horton’s prescription for mitigating this trend? “More intentionally transitioning to value-based care is one strategy … to help them better clarify their organizational strategies and objectives.”

M Health Fairview Heart Care in St. Paul, Minn., already has started down that road. In addition to the wRVU-based compensation plan that the health system’s East Division has had in place for years for its 23 undergoing a chest x-ray, r eceiving discharge instructions and having a ride home arranged. Another value-based strategy is negotiating with vendors to secure group discounts for stents, pacemakers, left atrial appendage occluders and other devices.

“Practices are trying to drive efficiency more than ever before,” says Johnson, who previously headed up a private practice group and now splits his time at M Health between administrative and clinical duties. “There’s a greater recognition that if you spend less time with electronic medical records and more time with the patient, or if you make better use of allied professionals like clinical nurses or advanced practice providers, then you’ll be managing your time in a more efficient way.”

While APPs have become fixtures in many clinical offices, the MedAxiom survey notes that their use is still “widely variable” among cardiology practices, with some groups having no APPs and others nearly 1.5 APPs per physician. “This will be a metric to watch in the future given the valuable role APPs can play in increasing access and reducing expenses,” the survey concludes.

Another trend to watch is the integration of cardiology practices within larger health systems. In 2018, the percentage of groups working in an integrated hospital/health system model ticked up to 83 percent, its highest level ever, according to MedAxiom, while the number of cardiologists working in this setting—either through employment or a professional services agreement—continues to rise.

Despite their dwindling numbers, cardiologists in private practice are benefiting from the rising tide of compensation in their profession. MedAxiom’s numbers show the historic income gap between the two cohorts closed to 11 percent in 2018, one of its lowest levels since the integration movement in cardiology began 10 years ago. In terms of real dollars, private cardiologists earn just under $65,000 less per FTE than their peers in integrated practices. While this might seem significant, the survey points out, it has narrowed by half since its peak in 2013 of nearly $130,000.

In the face of rising incomes and stagnant production, new technologies often are viewed as the means for changing how cardiology practices operate. Artificial intelligence could break the mold and usher in a new era of algorithmic-driven efficiencies, but it also could be years before the full effects are realized.

The effects of patient portals and telehealth might filter into clinical practices sooner. M Health Fairview Heart Care, for example, is starting to use electronic communications with its heart failure patients to provide daily monitoring and eliminate needless office visits. After logging in through their computers, patients are asked five standard questions about their condition and any changes they’re experiencing. If their a nswers fall outside the “normal zone,” a nurse follows up with a call.

“This is how we pick up patients who need to come in and those who don’t,” Johnson says. Reflecting on the broader impact of this streamlined new model of care, he comments: “I’ve been in the field for almost 30 years and very little has changed. Patients drive to our office, park their cars, come in and sit in the waiting room. We now realize that how we communicate with them can be a major driver of change—if things are going well and they’re meeting all our metrics, then we don’t have to burden them with an office visit.”

MedAxiom’s Sauer also is bullish on technology and telehealth to relieve some of the pressure on cardiologists in a market that could be staring at a shortage of as many as 121,000 physicians across all specialties within the next 10 years. “Telehealth has been around for a while, but it’s finally gaining traction,” he says. “Having a cardiologist get into their car and drive an hour to an outreach site is very costly and ineffective. Telehealth can clearly have a big impact.”

Sauer finds several other strong messages between the lines in MedAxiom’s survey findings. “The fact that we need to bring down costs but are doing so in the midst of an expanding need for our services creates huge opportunities for positive change,” he says. “And because of that growing need, none of us has to worry about job security.”

© Copyright TriMed Media 2020. Interested in LINKING to or REPRINTING this content? View our policies by clicking here.